The Iranian Crisis: Is War Inevitable? 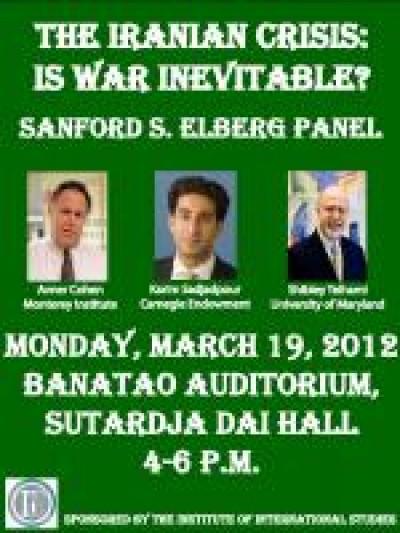 Avner Cohen, Karim Sadjadpour, and Shibley Telhami
As the U.S. and Israel reach a dangerous turning point in their relations with Iran, a panel of distinguished analysts will focus on these issues:
•Can Iran be stopped in its drive to produce nuclear weapons?
• If Iran succeeds, what will be the consequences for regional stability?
•In what ways do domestic politics and regional dynamics drive the principal actors—the U.S., Iran, and Israel—in their choice of war or diplomacy?
•How has the Arab Spring changed the dynamics of regional politics and the outlook for proliferation?
•How will the American Presidential elections affect the crisis?

Avner Cohen is a Senior Fellow at the Center for Non-Proliferation Studies at the Monterey Institute of International Studies  and a Professor in the Graduate School of International Policy and Management.  He is widely known for his path-breaking history of the Israeli nuclear program, is an internationally recognized author and expert on nonproliferation issues, focusing on the Middle East. His most recent publication is The Worst-Kept Secret: Israel’s Bargain with the Bomb.

Karim Sadjadpour is an associate at the Carnegie Endowment. He joined Carnegie after four years as the chief Iran analyst at the International Crisis Group based in Washington and Tehran, where he conducted dozens of interviews with senior Iranian officials, and hundreds with Iranian intellectuals, clerics, dissidents, paramilitaries, businessmen, students, activists, and youth, among others.  He is a regular contributor to BBC TV and radio, CNN, National Public Radio, PBS NewsHour, and Al-Jazeera. He contributes regularly to publications such as the Economist, Washington Post, New York Times, International Herald Tribune, and Foreign Policy.
Shibley Telhami is the Anwar Sadat Professor for Peace and Development at the University of Maryland, College Park, and non-resident senior fellow at the Saban Center at the Brookings Institution.  His publications include his best-selling book, The Stakes: America and the Middle East.  He has been a principal investigator in the annual Arab Public Opinion Survey, conducted since 2002 in six Arab countries.